■ Victor on the Cover of PureHoney Magazine 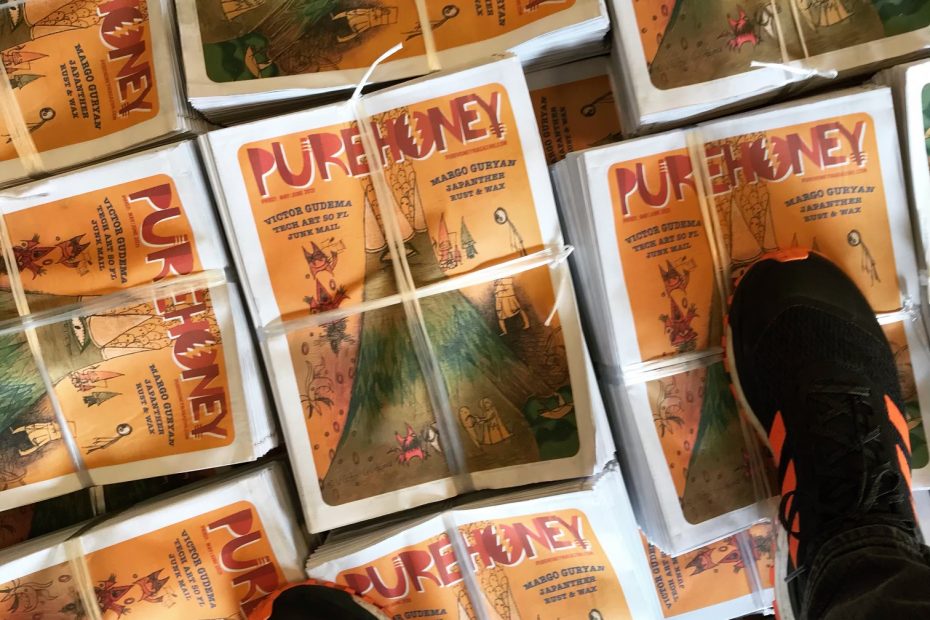 Original Article printed in the May-June 2021 Issue of PureHoney Magazine and in the online version: http://www.purehoneymagazine.com/victor-gudemas-art/

Though we all doodled our way through our youth, one look at a Victor Gudema painting reveals an artist with technique beyond his thirteen years. The student  at Boca Raton’s Don Estridge High Tech Middle School has a portfolio filled with work that displays both a child-like sense of wonder and a master’s sense of detail.

Gudema says he first got into art at six years old when he tried drawing the venus flytraps in his school science book. “Something about them made me really interested and it made me want to draw them, or capture them. They were beautiful, dangerous, scary, and interesting at the same time.”

Over the next years he refined a method of creating other beautiful and interesting images. “I commonly draw on paper until I have an idea I like. Then I paint some wood and then I draw over it and then add color last until it feels done. I’m not a fan of solid lines because they look immature.”

He says it’s an artistic decision that the figures that populate his art have a surreal look. “If you’re just about making things look real, like traditional historic artists, making something that just looks like a photograph, then there’s no meaning, there’s no story. We already have photographs for that. I want people to see my images and think ‘Maybe if I keep looking at it I’ll see something more.’”

Gudema has only just started displayed his art in public. He has a website gudema.com/victor/ where his art is available for purchase. This past spring his art was also displayed at both Pop Up Art at Pioneer Park and at the Art & Autism Expo. Victor’s Mom, Linda. said participating in the exhibitions was a spur of the moment decision. “He had been drawing so much, so when we heard about this little local art show we asked him if he wanted to set up a booth and display his paintings to the public for the first time. He was really into it and got all of his pieces ready. We kept telling him not to get his hopes up, there was a pandemic going on and hardly anyone would be there and he might not sell one. It was just to get out and show people. Well… he sold six. We were shocked! People just responded to them in such a positive way. It was heartwarming all of the encouragement and support he got.”

Success hasn’t gone to his head. Victor says he has some very relatable to any teenager goals for the rest of 2021. “I’m going to eat, survive, and finish that drawing of a rustic house and a lamp with a face that I’ve been planning.”
gudema.com/victor/